I am a cynic. I have always been a cynic, I’m happy to be called one and it’s a genuine pleasure when I’m proved wrong. It’s not that I don’t believe in people, people do great things; I just believe that for most individuals, their bark for change is far greater than their actual appetite.

Excitement, intrigue, and self-nature will generally produce results more regularly than responsibility. People are more likely to act fast when they see the immediate benefit for them.

Over the past few years, we have seen young individuals stand up for great things, both in the UK and around the world. Step forward Great Thunberg. Yes, younger people like Greta, are standing up for a greater social and collective responsibility for all our futures. But is it all talk? Because I can tell you one thing, they are not a fan of oat milk.

Excitement, intrigue, and self-nature will generally produce results more regularly than responsibility. People are more likely to act fast when they see the immediate benefit for them.

Over the past few years, we have seen young individuals stand up for great things, both in the UK and around the world. Step forward Great Thunberg. Yes, younger people like Greta, are standing up for a greater social and collective responsibility for all our futures. But is it all talk? Because I can tell you one thing, they are not a fan of oat milk.

The curious case of Oatly

Earlier this year, the Swedish company Oatly (currently on its way to becoming a $10bn brand) produced its first set of TV ads for the UK, in which teenagers shown as the protagonists of the age, shaming their fathers into milk alternatives. The children are depicted as the drivers, the force for change. The Thunbergs of home.

But the big question is, is this true?

Building a participation brand in FMCG

According to our Participation Brand Index study, 18-24-year olds have placed Oatly as their most disliked brand (of 51) in the UK. 36% of young people dislike the brand while a further 40% feel indifferent about it. 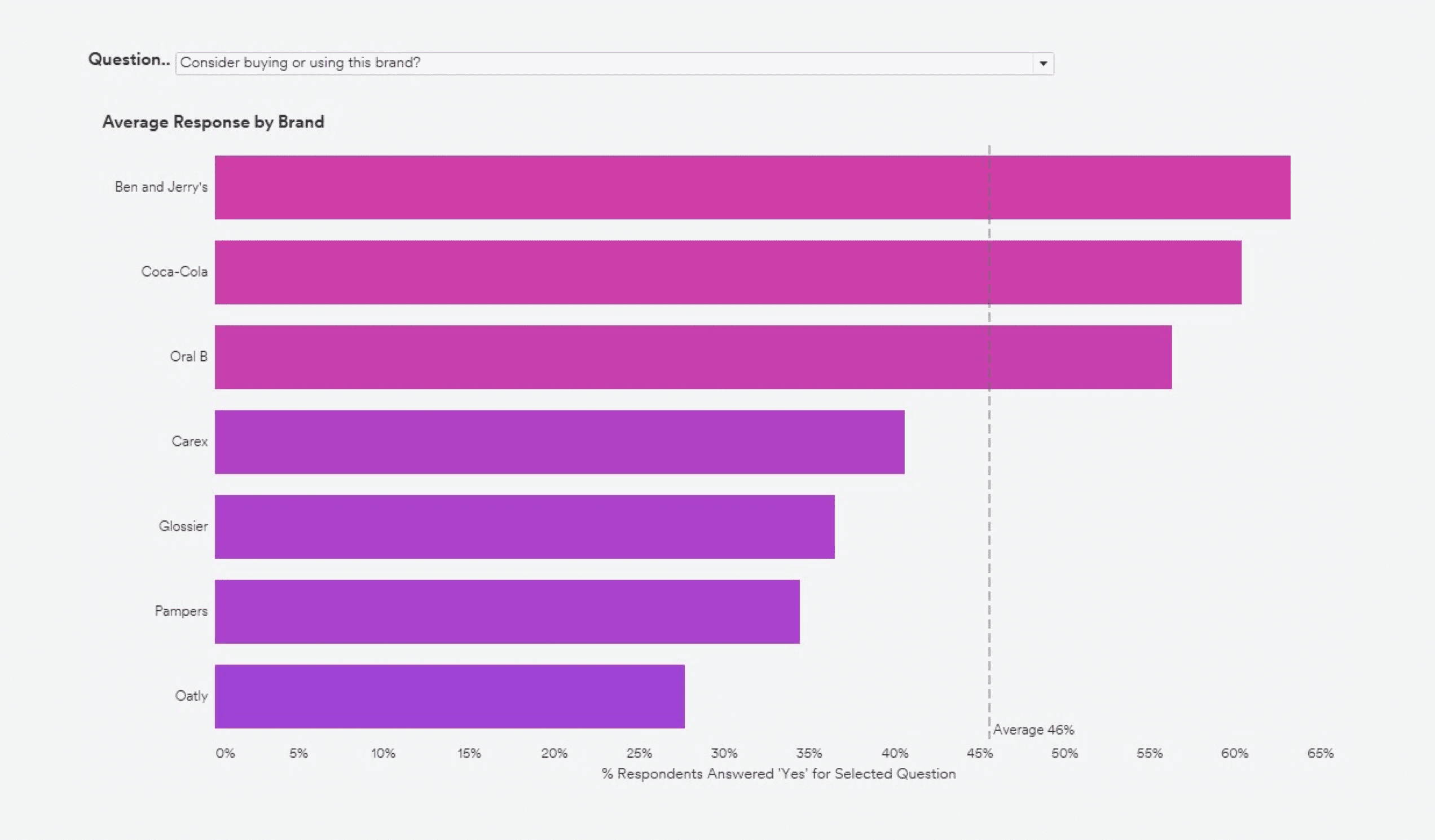 What is particularly interesting is that the rhetoric around social responsibility and inclusiveness, that drives both excitement and purchase, falls flat on its back for Oatly.

Of the FMCG brands studied, Oatly was the brand considered best at moving with the times and the best at making 18-24 year olds feel part of a community. At the same time however, it was also the FMCG product that young people would least consider buying, using, or recommending to a friend. 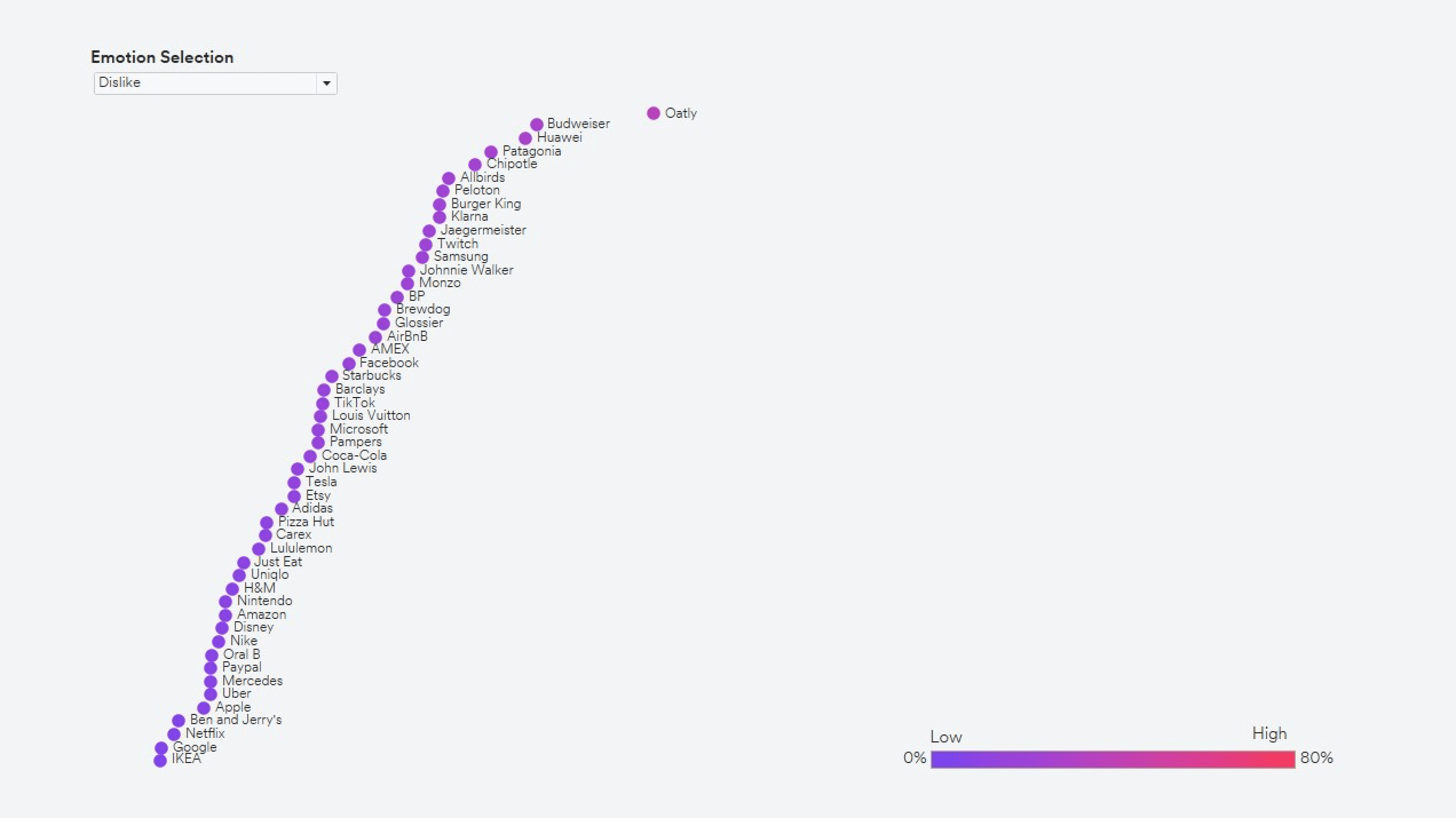 So, is Oatly doing something wrong? Or does Gen Z acknowledge that Oatly is in the right, but it just is not the product for them? 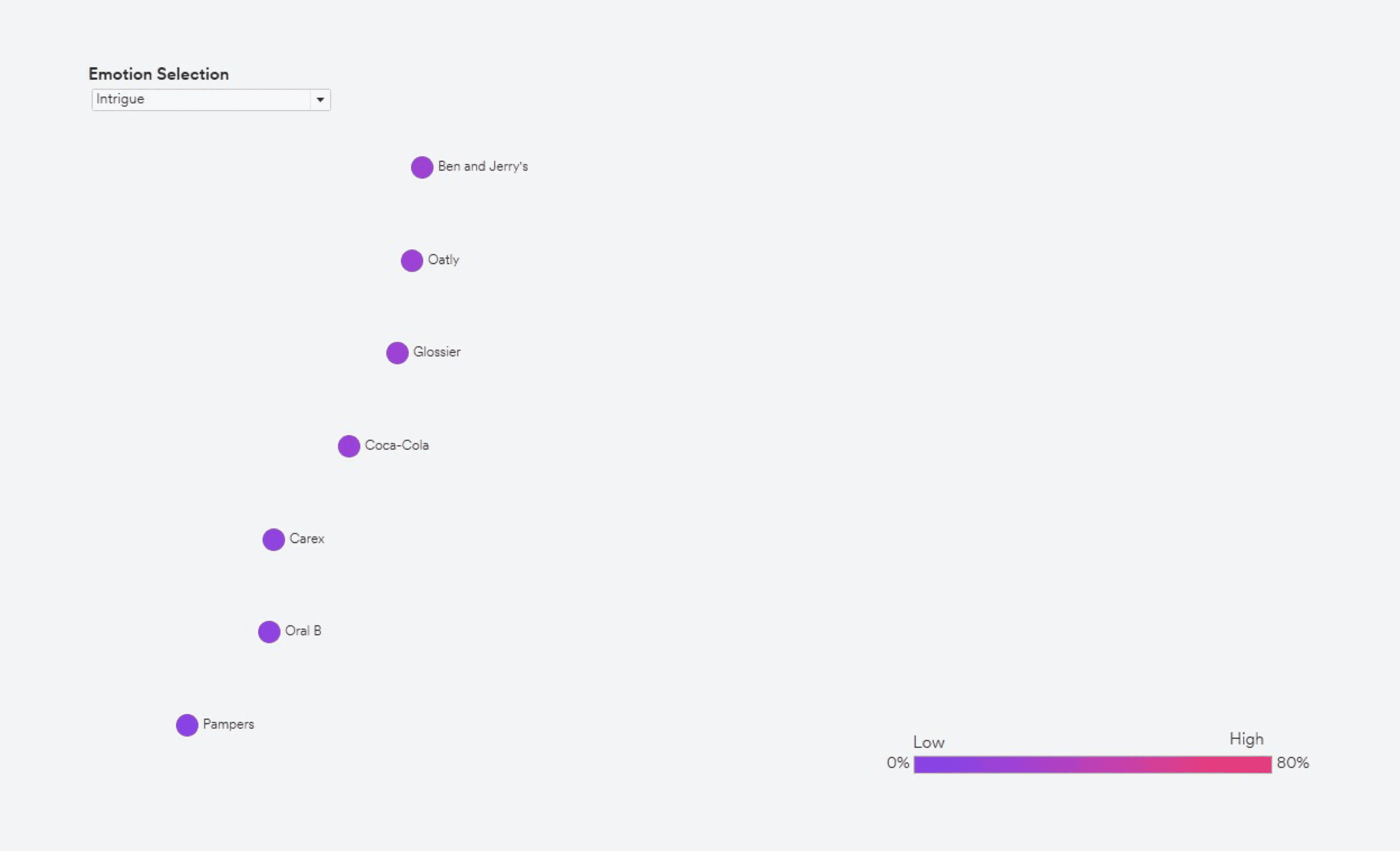 While this is greater than for those aged 25+ (13%), it offers insight as to why they are not clicking with young people. Interestingly, FMCG content by Oatly was the second-best brand in driving intrigue, second, only to the dairy-based anti-hero Ben & Jerry’s. 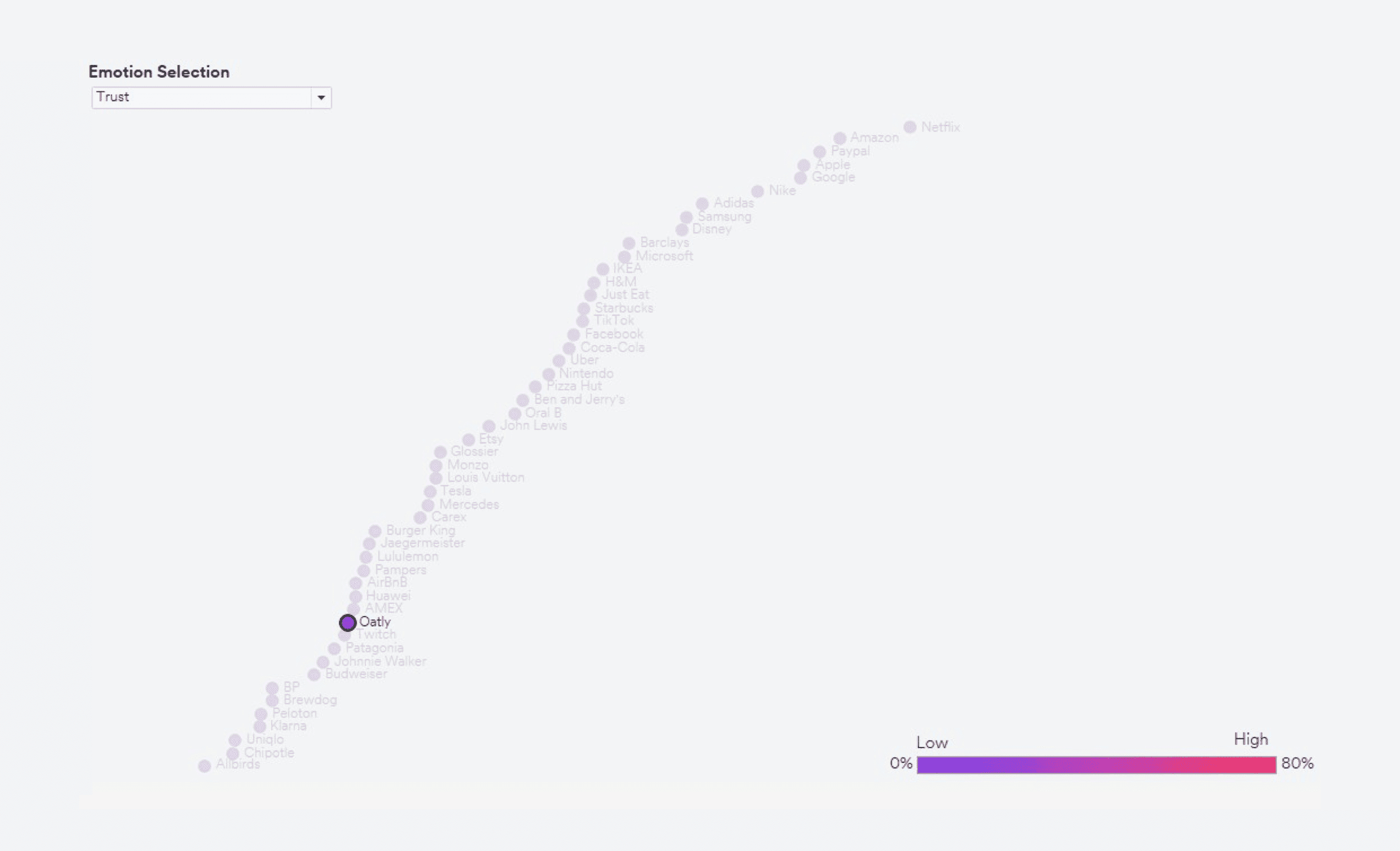 Ben and Jerry’s are popular – of that there is no doubt. Over x7 as many respondents felt ‘Excitement’ with Ben & Jerrys compared to Oatly, x3 more felt ‘Love’ and 50% more felt ‘Trust.

Ice cream. Cream. Milk. Dairy. Cows. Methane & CO2. Logically, Ben and Jerry’s should be the enemy of the anti-udder generation. But they’re not, are they? Because people like sugar, and chocolate, and well…Ben and Jerry’s are just…fun.

Ben and Jerry’s drove the most positive Net Promoter Score of any FMCG brand in the 18-24 age range, and were:

Oatly have worked hard to make their branding stand out over the past few years. Indeed in an interview, John Schoolcraft (the Creative Director of Oatly) stated the brand used to look like “a Dutch multinational, just indistinguishable from anything else”. However, it doesn’t add up to the power held by the Vermont based ice-cream company.

I’m not saying that Ben & Jerry’s are an evil corporation, far from it. Like Oatly, their website is chock-a-block with pages about their values, the positive influence they have on many aspects of modern living, and a section dedicated to their six key issues they care about.

The big question is, how can Oatly cut through to 18-24-year olds like Ben & Jerrys do, while not having the freedom to develop banana, caramel & marshmallow oat milk to put in your tea?

How Oatly can build ‘active participation’

There are two data-driven areas which would drive Oatly’s popularity with Gen Z:

Of the FMCG brands, despite the new run of TV advertisements and their appearance at the Superbowl, Oatly is the least recognisable to 18-24-year olds (while Ben & Jerrys is second only to Pampers). Oatly could consider a social media partnership to boost their popularity with younger generations as, of all brands surveyed in the UK, Oatly scored in the bottom 10 for “Used or endorsed by somebody I follow on social media”.

Gen Z doesn’t currently trust Oatly as a brand, with Oral B, Pampers, Coca-Cola and Carex all perceived as brands better at shaping the future. Ben & Jerry’s are perceived as the best FMCG brand in creating exciting and memorable moments. If Oatly can break into this space through interactive participation campaigns, as we have seen work for brands such as KFC (redefining their digital ecosystem), Barclaycard (through personalised targeting) and Value Retail (developing a meaningful rewards programme), brand affection and trust will grow. Making the experience of interacting with Oatly more enjoyable, making individuals gain a personal benefit will drive brand engagement more than pure social altruism.

If Oatly are able to distinguish themselves as a brand that excites and is socially responsible, they can push themselves towards challenging for Ben and Jerry’s levels of love and trust.

Get in touch to arrange a Participation Brand Index workshop, tailored to your business’s needs.